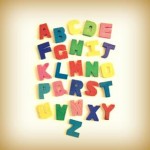 Zip and I keep working on patterns in putting things in or out of things. He’s definitely got the idea but doesn’t reference me much yet. A few days ago, we began to put clothes in the washing machine. Instead of putting the basket right next to the washer, I left it a foot or two away. Now, Zip and I were in true assembly-line. I gave him the role of handing me the clothes and he really took it on. Sounds silly, but in this position, it made it clearer to him and he carefully handed me each item. Since we could face each other now, he paid much more attention to me and made sure I got each item. Other times, he hasn’t seemed to notice whether I dropped it or got it.

Just now, we were cleaning up alphabet magnets and I found an opportunity to encourage him to pay attention, to relate more to his partner in the interaction. He was putting handfuls into my cupped hands and I’d dump them into the bag. A letter fell onto my wrists. I patiently spot-lighted it, “Ooops…….. ooops,” and waited for him to see it. It was just a few moments, but felt longer, trust me. He looked at me and down at my hands. Then he picked up the dropped letter and put it with the rest in my hands. So tiny but so important in the quality of our interaction. See, Zip is smart and will try to turn these tasks into robotic assembly work. I’m just trying to keep it real.